When is the last time you surrendered?

And I don’t mean given up or anything that’s 50 Shades of Grey! I mean, when is the last time you said, “Okay, I surrender, I’m going to go with the flow?”

Because when you’re constantly fighting, banging your head against a wall, walking through mud and getting nowhere – you’re setting yourself up for exhaustion.

Have you been working really hard but making no progress?

Have you been doing what you’ve always done but not getting the same results?

Have things just been too darn difficult lately?

For a lot of people, the concept is so completely foreign that they don’t even understand it. They hear it and think, “Well, this must mean that I just give up on my ideals, go with the flow, and follow the pack.”

And that’s not what I mean at all!

Imagine water as it flows down a riverbed. On the edges of the river, water gets pushed into little coves or oxbows. (This happens even in the smallest rivers or streams!) 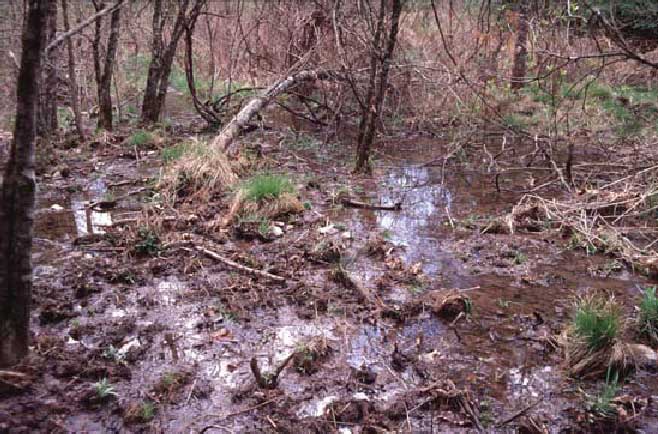 As the water continues to push in there, it has nowhere to go… so it pushes and pushes and swirls and swirls, but can’t get out of the cove.

This is where all the dead leaves and branches get stuck. The water turns dark and feels thick and sludgy. If you’ve ever encountered a river cove like this, you know it’s pretty nasty and slimy and smelly.

That’s because things aren’t flowing easily. This water has strayed ever so slightly off the main channel of the river and gotten backed up in “the details” along the shore.

Now think of the water at the center of the river, in the main channel. It’s moving fast and fluid. Sure, there are rocks and sticks out there, too, but the water in the middle rolls right over them and continues on its way.

When you’re banging your head against the wall and everything feels more difficult than it should, it’s kind of like the water that got stuck in the stagnant pool on the side of the river. You have strayed ever so slightly off the course of your intended path and gotten bogged down in the details around the edges.

Now here’s a thing about rivers: while the sticks and leaves and muck might stay in that stagnant area for a while, the water itself eventually swirls free. It’s pulled by the force of the river – and surrenders to the natural down-hill pull.

So surrendering means you’re allowing yourself to be pulled out of the nasty slime and muck!

It’s the idea of getting out of that stagnant pool and back into the productive flow in the middle. It means allowing yourself to be pulled by the river’s current toward your intended destination.

Here’s the 3-step process to get back in the flow:

Stop Pushing. It’s pretty simple, just stop doing what you’re doing. This doesn’t mean throwing up your hands, quitting, and becoming a hobo! It is just stopping what you’re doing (which isn’t working anyway!) long enough to get out of the muck. The whole process of getting out of the stagnant water can happen in only 3-5 minutes. (We’re not talking about a big fat hairy deal here!).

Breathe. Take a big deep breath. Get quiet. This might mean closing your door or going into another room, but let yourself get away from everybody else for just a moment and take a few deep breaths.

Ask. Ask yourself: “What is it I really want? What is the ultimate outcome I am truly seeking in this situation? What would it mean for things to be easy?” Ask yourself, “What kind of person would I have to become in order for this to flow easily?” As you ask yourself these questions, don’t try to answer them. Yes, you read that correctly. Don’t try to answer the questions. Simply sit in the question… and wait. Something will bubble up for you, and when it does, simply follow it… even if it initially seems unrelated. It will lead you to your best next step and bring you back to the middle of the river.

I know that some of you are thinking “This is nuts! Clearly what I really need is a better plan.” Trust me, if you could THINK of a better plan, you would have done that already.

If you’re willing to sit in the question without searching for an answer, and surrender yourself to the flow of the river, your next best step will show up.

Let me hear from you! Leave a comment below and tell me what comes up for you as you sit in the question.